Since I spent an alarming amount of hours at church last week and since I’ve had a number of really ridiculous work meetings this week, it’s time to do some of the book reviews piling up on my desk.  I’m super excited about this one; Paladin of Souls is one of my favorite books, and I love it more every time I re-read it.

Things you need to know:  this is fantasy, and it’s the second in a loose trilogy by Lois McMaster Bujold.  You don’t necessarily have to read the first one first, but it’s also a smashingly good book (especially in audio version) and it does help set up the main characters. 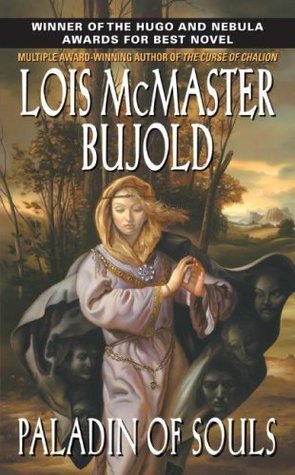 The book follows the woes and trials of Ista, Dowager Royina of Chalion—basically, queen mother of a late-medieval-Spain-like empire.  In the first book, she’s not the main character but is a pretty major player because everyone thinks she’s totally nuts.  As it turns out, she isn’t nuts; she’s haunted by a huge mistake she and her husband made trying to rid the kingdom of a curse.  This haunting does include being able to see ghosts, but mostly it just means she’s on the radar of the gods.

The gods are mostly why I love this series and this book so much.  For Chalion, there are five (in adjacent kingdoms, there are four; they’re called Quadrenes rather than Quintarians, and watching the interplay of the two systems shades scarily close to some of the clashing tensions of the Abrahamic religions in our own world, which is why fantasy is brilliant):  the Mother, connected with summer; the Father, winter; the Son, autumn; the Daughter, spring; and the Bastard, connected to all that is out of season, a little weird, and a little off.  The five together are kind of like the best version of Olympus ever because they have the relatability of Greek and Roman gods but the awe and grandeur of the Judeo-Christian God.  If it weren’t a fantasy thing and I wasn’t Christian, I would totally consider this faith system.

So Ista has had dealings with the gods, and in Chalion they understand that being picked to deal with the divine isn’t usually a fun or easy thing—this acknowledgement is what draws me to the series, I think.   In this book, Ista has had enough of the gods wanting her to play along with their ideas as well as everyone treating her like she’s bonkers because they don’t get it, so she goes off on pilgrimage.  As a medievalist, this is delightful, because it pulls on all sorts of Chaucerian connotations for me.  As a Christian in the throes of figuring out how to serve God and yet really wanting to dodge Him most of the time, Ista was an easy connection.

The pilgrimage, of course, has all manner of things that happen, because you don’t dodge gods that easily.  There are mysterious occurences, unexpected travellers, fantastic female characters, a guy who’s dead but not quite, murders no one can solve, border wars, misled wives, anger, guilt, shame, surprise—this book has it all.  I don’t want to spoil it too much for you, but I do want to extol the fact that this is a phenomenal book for those who are searching (as well as being bloody entertaining).

In running from the gods, Ista finds herself smack in the middle of their plans.  How true!  And, along with having to deal with that situation, she realizes she has to deal with who she is and who she was.  She has to face what being called by the gods looks like, and that they don’t call the perfect but they do call the willing.  She and her fellow characters look guilt and shame and vengeance and jealousy in the face and are asked to decide how they will manage those and whether or not they will shed them for the ideas of love, of friendship, of peace.  Love here isn’t a sappy paperback love but an adult concept of people bringing a lifetime of scars to the table.  Peace isn’t a doe-eyed beauty queen answer but a true wrestling with laying aside all that brings us chaos—both in interpersonal relationship and within ourselves.

And in and through it all are these gods who are just brilliantly written.  The one who figures most prominently in this book is the Bastard, and I like him.  (Although it drives me a little crazy that the editing in this isn’t that swell and there’s terrible inconsistency about capitalization when it comes to pronouns for the gods).  He’s  crass, and sexual, and funny, and dreadfully dark sometimes—it’s his task to deal with the demons in the world, corrupted souls who try to take over human bodies to live again.  But his relationship with Ista is right, and feels very true to me and mine:

“It felt very comfortable, cursing her god.  He was a god she might always curse, and the more inventive the invective, the more He would grin.”  (416)

I get that, volatile and sharp as my relationship with God often is.  I like that (although it’s fiction) somebody else is living faith in such a way that isn’t always, well, couth.  Or even totally respectful.  But filled with love, and a different kind of respect.

The best, though, is this quote, from the gods to Ista on her statement that she isn’t someone worth the gods’ time:

“How fortunate for Us that We thirst for glorious souls rather than faultless ones, or We should be parched indeed, and most lonely in Our perfect righteousness.  Carry on imperfectly, shining Ista.”  (412)

Yeah.  When a book hits truth like that, it gets all sorts of accolades from me.

One thought on “People of the Books: Paladin of Souls by Lois McMaster Bujold”