I do deliberately avoid commenting on news items most of the time because that’s not my focus and also because I think news (especially in America, but also in places like India) is stupidly blind to what links us as humans and far too obsessed with fads, crazes, and the idols we shape out of other people.

However, sometimes there are stories that delight me so or piss me off to the extent that I get pulled in, and then, Reader, I pull you in with me.  For the past week, the various newsheads have been dissecting the actions of Elliot Rodger, a twenty-something who decided to shoot six people and himself for fuck-all reasoning.  I don’t much care about him, or his manifestos, or what the cops did or didn’t see, because I think it’s a larger conversation about gun violence in America that we aren’t having and won’t have until folks see that guns do in fact kill people because it’s not that easy to kill someone by shouting “BANG!” really loudly.  What I do care about is the Twitter tag (even though I personally have nothing to do with Twitter and dislike the service) #YesAllWomen that it sparked.

My cousin Hopeful is a social worker (God bless her) and has seen some pretty hairy shit.  She told me once, though, that every woman—EVERY woman—has a story of some kind of verbal or physical sexism they’ve encountered.  And it’s true; even as she was saying it, several of mine jumped to mind.  And if you’ve not met me, Reader, understand that many would be quite surprised by that.  I’m rather androgynous in appearance and conversation (mostly by preference) to the point that friends often consider me asexual.  But I have my own stories of men who decided my body was to whatever degree theirs to mess with, as well as the stories of the twisted culture we’ve built where people feel justified in seeing me as somehow deficient as a woman for not being catcalled on a regular basis.

So this #YesAllWomen thing is an explosion of Twitter users saying it is not okay to expect women to be sex objects, it is not okay to continue in a rape culture as though this is how it has to be, and it is not okay for women to have to put up with this shit.  To which I say, AMEN.  And, almost immediately, to which some guys said, #NotAllMen.

The best response to that, in my opinion, is here, but I will also say this.  Most of my closest friends are guys.  I am far more likely to trust men than women, all things being equal.  I would not be in the place I am without folks like Magister, Mr. Great-Heart, and Interpreter.  So I know right well that not all men are “like that.” 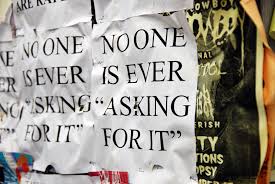 What I also know is that there are men “like that.”  And every time we as a culture accept a rape joke (of either sex, because I realize sexual abuse of males is even harder to discuss), or trash a woman on TV because of how she looks rather than what she’s saying, or feel like it’s okay to talk to the new gal in the office with sexual innuendos because it was “just playing around,” we have failed women’s value, security, and confidence.  We as humans should not stand for this.

We as Christians should really not stand for this.

There’s a lot of flak about sex and gender hierarchies in the Church.  I get that.  I’m a medievalist; trust me, I’ve watched the development of men telling women to STFU.  But in the grand post-modern spirit of peeling back our layers, let’s think about this—God never intended women to be in any way less than men.  EVER.  In both creation stories in Genesis, man and woman were made to be partners.  We are incomplete without each other.  God intended men and women to work the earth He had made, equally.

So when women get rape threats on the Internet by trolls who hide behind anonymity, or when women have to resort to identifying themselves with another man so a guy will leave them alone, or when women and men have to apologize for choosing to be something other than a sex fiend, we should indeed be in an uproar.  We should be asking as a culture what the hell is going on, but we should also be asking as a Church what we are or aren’t doing that’s supporting these ideas.  We should be asking why on earth women, as valued children of God, are regularly and casually considered less, such that shit like this happens.  We should be broken in our very souls that this is an ongoing aspect of our global interactions.  Some women have taken the hesitating, halting step of telling their stories, and some men have taken the humble and helpful step of actually listening.  We have opened a dialogue—and it is absolutely imperative that we keep that open, that we keep talking, that we tell the world in all its colors and orientations and languages and faith systems that the sexual objectification of women is NEVER.  EVER.  OKAY.

Because there should never be dismissals of assault like “he was only joking, it’s not like any clothes came off, so it wasn’t that big a deal.”

Because women should not have to censor their reactions to things like this based on whether their boss/friend/coworker will see it and negatively regard them.

Because it should not be common for women to have these stories.

Because even one woman having the memory of losing herself without her consent is too many.

Because “trigger warnings” are a real thing.

Because a survivor telling her story is often silenced by everyone’s discomfort or judgment.

Because the scars run deep.