I realize this isn’t quite the expected review to pop up in a religious blog in July; in my defense, I did read it around Hallowe’en (told you I was way behind on reviews).  It’s one of those books that are classics not in the sense that everyone had to read it in school (looking at you, The Great Gatsby) but in the sense of everyone kind of knows what it is and references it a lot but usually hasn’t actually read it.

So I picked it up…somewhere…years ago and finally said, “Yes, I will read this.”  And I did.  All 502 pages of my incredibly poorly edited Scholastic edition.  But it rewards return; I would come back to it when I finished other books and it welcomed me to the story with never a word dropped or confusion on re-entry.

Here’s the thing.  Of the history of spoiler alerts, Dracula reigns pretty high up there.  If you live anywhere near anything having to do with the U.S. or England or Western civilization in general, you know Dracula is a vampire.  (And if you didn’t know that and I just spoiled it for you, know also that the Titanic sinks, Moby Dick is a whale, Gandalf isn’t dead, and Superman is Clark Kent.) 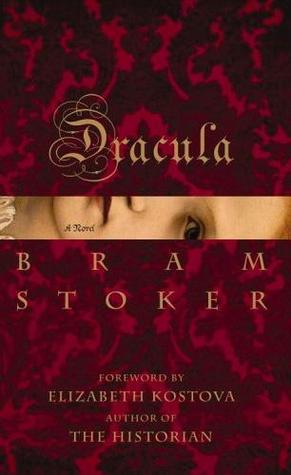 Bram Stoker being a genius comes in the face of this–how can a book be a thriller when everyone knows who and what the bad guy is? I don’t know; I don’t know how he does it, because I am not a genius. But Stoker (in his Victorian fifty-words-are-better-than-five way) actually does build tension. He draws out the relationships around this shadowy villain; shadowy not least because Dracula really doesn’t figure in much of the book. The best kind of thriller is the one where the evil/monster is juuuuust offstage most of the time, where the only hint you have is the hairs standing up on the back of your neck because when you turn around, there’s nothing there.

Stoker can do that.

He’s also a genius in writing style. This would never have worked as a straight-up prose narration, so we get the story through people’s diary entries, through letters, through telegrams and newspaper clippings and memorandums to friends, through doctor’s notes and meeting minutes. We get the life of the story, and that helps make the characters themselves feasible. They explain that they’re writing because they have a moment and want to record this fantastic horror, and we believe them rather than feeling the presence of The Author needing us to know something.

Yes, there are all sorts of idiotic moments of women being frail and simple and men being burly and stupid, because it’s Victorian fiction. If you can’t handle pre-feminism, don’t bother. You’ll be missing out, though, because this truly is one of the weirdest love stories ever. The men are stupid because they love in their own stuffy English way. The women are beautiful in their simple strength, shining at the end as they step to the front of the cast to really drive the narrative. And sexy sexy Dracula (because really, snacking on the bare throats of sleeping women while their loved ones are IN THE NEXT ROOM? If you missed the innuendo there, you haven’t been paying attention to the Victorians) who stealz ur ladiez is just brilliantly understated and creepy in his present absence.

But why is this on this blog?  Because the entire concept of Dracula is that he is evil, represents evil—this is why he’s not so good around things like crucifixes and sunlight (although the garlic thing is a mystery to me).  Evil, in Stoker’s world, cannot co-exist with good and will be utterly destroyed by it.  The travesty of Dracula turning Lucy is only partly because now she nibbles on kids:  most of it is that her soul is now kept from God in the worst kind of hell her over-protective and clueless menfriends can imagine.  The language when she is freed (again, spoiler alert) has everything to do with this dichotomous knowledge of Good and Evil:

There, in the coffin lay no longer the foul Thing that we had so dreaded and gown to hate that the work of her destruction was yielded as a privilege to the one best entitled to it, but Lucy as we had seen her in life, with her face of unequalled sweetness and purity.  True that there were there, as we had seen them in life, the traces of care and pain and waste; but these were all dear to us, for they marked her truth to what we knew.  One and all we felt that the holy calm that lay like sunshine over the wasted face and form was only an earthly token and symbol of the calm that was to reign for ever.  (285)

In the 21st century, thankfully we are trying to stop thinking about women as sweet and pure puppets, but we’ve also kind of stopped thinking of evil as a real thing.  It’s a concept, a nebulous malice Out There.  And I think Stoker had hold of something in making it a very concrete and present person—partially because Dracula is a good villain, but partially also because the idea of Evil in the world has a lot of reality to it for folks who have faced it.  Not to get all evangelical on you, Reader, but I have met the minions of the Adversary, and they are pretty intense.  I think we do ourselves a disservice if we scoff at embodiments of evil—not that we should all start believing in vampires, but that we should understand that the things that go bump in the night really aren’t just chemicals in our heads sometimes.

I’m totally down with modern science and I’m not calling for the return of burning demoniacs, don’t worry.  I just think that books like this that acknowledge the idea of calling God “Savior” comes with the idea that we are saved from something are worth reading.

Also, it’s just a really decent thriller.  (Except for the ending—seriously, Stoker, WORST LET-DOWN EVER.  It was so incredibly underwhelming I wanted to throw it across the room.  WHAT HAPPENED, STOKER?!)

2 thoughts on “People of the Books: Dracula by Bram Stoker”