I confess:  I am a Tolkien fangirl.

Not in the I-write-fanfiction-and-have-a-Legolas-pillow kind of way (Aragorn was always more my speed, anyway), but in truly being a fan of Tolkien and his writings.  I’ve met Tom Shippey, one of Tolkien’s biographers and a prominent Tolkien scholar.  I’ve been to the Eagle and Child, where the Inklings hung out.  I’ve taught Tolkien’s famous essay Beowulf:  The Monsters and the Critics and his translation of Sir Gawain and the Green Knight.  I’ve read The Silmarillion.  Tolkien has his own shelf in my library (well, he shares it with some Harry Potter stuff; space is limited.  I doubt he minds—his BFF C. S. Lewis is in another shelf sharing space with the dictionary and a lot of reference books).

I love Tolkien, and his world, and his books. 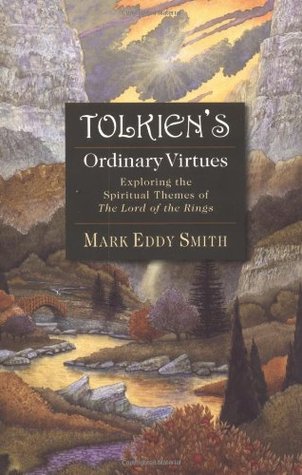 So I’m super disappointed to be lukewarm about this book.  Combining spirituality and Tolkien?  Right up my alley!  And I wasn’t totally off in that excitement—there are some really good quotes and thematic connections made.  But for the most part, it was pretty…flat.

One of my major beefs was form:  it felt, throughout, like a fan’s praise of Tolkien rather than a real grappling with the text material.  Which is pretty much what it is—Mark Eddy Smith has no credentials to set his opinion apart from anyone else’s, no systemic study he did that makes this work a scholastic or sociological endeavor.  He really likes The Lord of the Rings (a mere drop in Middle Earth’s bucket of existence, if you didn’t know), and he had some thoughts about the themes that show up.

Hell, I can write that.  And I have a tendency to regard books the same way I do art:  if I can do it, it’s not remarkable.  Go ahead, psychoanalyze the esteem and value issues in that all you want (I know there are plenty), but I want to believe that surviving the travail of getting published and having your manuscript pulled out of the pile and sold, really sold to real people is more because of talent and writing prowess than being in the right place at the right time.

(Yes, I know that Twilight and Fifty Shades of Gray blow that theory out of the water, but fiction is its own beast of strange proportions.)

Tolkien was himself a lifelong Catholic, devoutly part of his faith, and it’s hardly difficult to find that faith laced through his characters.  So a lot of these little virtues that get pulled into short chapters are obvious (at least to me, which I realize sounds arrogant as all get-out).  Tolkien’s own words on the matter tell the reader s/he should be looking for those kinds of sign-posts:

We have come from God, and inevitably the myths woven by us, though they contain error, will also reflect a splintered fragment of the true light, the eternal truth that is with God.  Indeed, only by myth-making, only by becoming a “sub-creator” and inventing stories, can Man aspire to the state of perfection that he knew before the Fall.  Our myths may be misguided, but they steer however shakily toward the true harbour.  (13)

I love that image, and how it introduces all sort of interesting conversations about what “myth” is and what “truth” is and whether factual has to mean true and vice versa.

The book itself is set up to go through LOTR from start to finish and pull items along the way, which I think stilts what it could have been—there are great examples of Hospitality (chapter 4, part 1) in the middle of Return of the King, which Smith’s system won’t allow him to explore because that section is devoted to the first part of The Fellowship of the Ring.  I get that the work is so complex you could get buried under only one virtue if you didn’t limit them somehow, but I still felt that the framing was rather artificial.

All in all, it was an interesting and quick read, but really, go read Tolkien himself.  The guy was a genius.  A weird, crabby, Oxford-don genius.  And his faith drove him to create in ways that I think made God smile—at least, that’s what I’d like to think as a fangirl.

One thought on “People of the Books: Tolkien’s Ordinary Virtues by Mark Eddy Smith”