I’m not really a Robert Frost fan.  I mean, I respect his work, and my best friend loves his writing, so it’s not like I hate his poetry.  I’m just not overly attached to anything of his the way others seem to be.  I was thinking of that this week because my choir’s anthem for church—and the sermon itself—was based on Frost’s Two Roads poem (easily his most well-known).

The song was just the text of the poem with a musical setting designed to help you feel the regret, hope, and nostalgia many find in the work.  The sermon was about choices, and listening to God in finding your path, and other such ideas—to be perfectly honest, I wasn’t really listening.

Sunday, I was a little sick of paths.

I find I issue a lot of ultimatums in my prayer life, which is hilarious both because I have zero standing to back up any demand I make of God “or else” and also because He usually responds, which sets me back on my heels.  You’d think I’d learn, after 7 1/2 years of deliberate faith life.  Nope.  I keep saying them, and somehow just framing where I find myself in such stark terms seems to help me.  So on Sunday I was fried, and people-overloaded, and stressed out, and tired, and really frustrated, and spoiling for a fight.

So I tried to pick one with God.

I know that sounds like the worst plan ever, but sometimes that’s the only path I know to take to God.  Call it dysfunctional, but I don’t really do sorrow or pain or fear.  I do anger, and I do it full throttle, such that I have many times found myself in an empty church screaming at the God to Whom I cannot cry.

Is that too much for this, Reader?  May I name that anger to you in the hopes that you will hold the rawness of it, will see the sacred that it oddly is with this God Who can handle everything and wants us to come to Him, even if it’s in a shouting match?

The fight I tried to start was prescribed by that ultimatum:  break me open or set me free.

You see, Reader, I am dangerously close to a mindset where I actually want to do ministry, where I not only accept that some form of service to the Church is where I’m headed but also that I would choose that voluntarily, and that even parish ministry wouldn’t be out of the question.  How terrifying!  How mortifying!  And yet I see that I am beginning to bend every piece of myself toward this—except my heart. 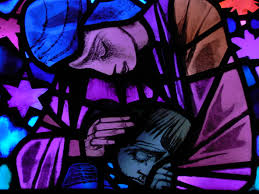 Compassion is one of the most elusive pieces of human relationships, not least because it’s bloody exhausting.  It’s a Latinate word, in case you didn’t know:  con + passus, literally “suffer with.”  And I don’t know about you, Reader, but I find plenty of suffering all on my own.  The idea of suffering with somebody else—of walking with them on their path—seems downright stupid.

Yet I ask it constantly of others.  I ask it every Friday of you, patient Reader:  to suffer, to learn, to grow with me as I stumble down this path of discovery in a life of faith.  I ask it of my friends who stand with me when I am stalled on even the straight sections, when I see only what could have been rather than what still may be.  My engaging the world around me on any level further than the giving of a name asks for compassion of infinite degrees, and I have tried to live without ever asking for or accepting it and that—well, that hasn’t gone well.

Compassion is a necessary cornerstone not just of professional ministry but of humanity, especially within a faith system.  Yet I am finding less and less of it in my jar of self these days, and I won’t know why or how I might replenish the store.  I am selfish, and currently content to be so—hence the ultimatum.  I wanted God to either refill my oil jar or set me free from this Call He has placed on me.

It’s always interesting which prayers God decides have the red important flag on them.  There’s an elderly woman I know who is in a nursing home now and fading pretty quickly, and I went to visit her Monday—still fried, still tired, still unsure of why I was even bothering.  She only knew who I was about a third of the time, as her mind is a mostly in a world gone 40 years with only her body to uncertainly clutch the present.  Teach me compassion, I asked of God.  So I helped this woman take her non-slide socks off when she was too warm and put them back on as she chilled.  I listened to her stories about we we had done last week, a week in which I had not yet been born.  I sat in silence as she drifted in and out of sleep, simply being there in the half-shadows of beeping machines and Jeopardy blaring in the background.

Teach me compassion, I asked of God, because without it I cannot walk this path, and the other one looks so very inviting.  Let Me show you how soft the clover leaves are, God said, and how deep the human soul goes.  Walk this path not because it is easy, but because I am on it.

The path is almost always more than two divergent roads.  But for now, I stand at their joining and see that some days, it seems the passing has worn them about the same.  But perhaps it is not about caring for the whole world with heart open and hands on all the wounds.  Perhaps it is only that every day, you realize you cannot stand still forever, and compassion doesn’t have to be suffering and pain.  It can be taking off socks, and putting them back on, and that makes all the difference.