Of all the languages I’ve dabbled in (and trust me, there are many; I’m terrible at actually becoming fluent in languages, so I’ve become excellent at the introductory basics of lots), I’ve actually never formally studied German.  However, it was the one to come to mind when I was thinking about this post—the title, if you also don’t speak German, asks, “Do you speak prayer?” 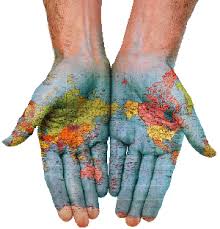 I work in a department of languages at a university, which means that I can hear some four different languages outside my office door at any given time; in partnership with another department, the professors I work with teach nine and speak about thirteen among themselves.  It’s pretty cool, actually, to be daily reminded that the world is a lot bigger than my community.  And it’s also really cool to be reminded that God not only knows all of those languages but hundreds of others.  He hears prayer in every possible language—even the made-up ones.  Try praying to God in Klingon; I’m willing to bet He’d hear that.

As I mentioned, I’m not fluent in anything other than English.  I have, at various times, taken Spanish, Latin, French, Old English, Middle English, and ancient Greek.  I know a handful of things in Romanian and Japanese and American Sign Language and Elvish (Sindarin, in case you’re as nerdy as I am), and what I forget sometimes is that I can use any and every part of all of those things to try to talk to God.  I remember standing on the edge of a hill in college and shouting Latin at the night sky when I was angry enough at God that English simply didn’t do it justice.  (Latin and Spanish are the languages in which I have spent the most time, so they’re my go-tos for prayer.)  But I have also prayed in Gaelic when there was no softness soft enough for the gratitude I felt in English, and I’ve never taken an ounce of Gaelic in my life.

I saw a production once of “A Midsummer Night’s Dream” done by a troupe out of India.  It was beautiful, but one of the coolest things was that the directors had decided that each actor should learn his or her lines in whatever language or dialect was most comfortable.  This meant that a goodly chunk of the play was in Hindi, but also English bits with Kashmiri and Punjabi and Tamil and Sindhi and a whole host of others I couldn’t even try to understand.  I had to know the play, because I sure wasn’t going to figure out what was going on by the lines.  It was disorienting at first, and it took a while to learn to let the occasional English pieces act as signposts rather than life rafts.  But I got there, and then I realized I did know the play, and I didn’t actually need to know what was being literally said to figure out what was going on.  And if I got lost, I got lost, and I waited for the next signpost while I listened to how gorgeous it was to hear all of these people speaking their native tongues.

One thing I know well is the Lord’s Prayer.  I used to have it memorized in both English and Latin; about half of the Latin is gone these days.  But I’m thinking it would be good to sit with it in languages I know and languages I don’t and listen to the thousand tongues of God; for languages I can’t read, I can hear others.  And in that, I can listen (in a sense) to the prayers of others, knowing that God hears no matter what language feels most comfortable—and when no language feels comfortable at all.

What a marvelous thought, that God is that big.  And when we need them, Deus verba providebit—hopefully.  Vaya con Dios, Lector.

Let the words of my mouth and the meditation of my heart be acceptable in your sight, O Lord, my rock and my redeemer.  (Psalm 19:14, ESV)