There is so much talk of memory in the Bible, have you noticed?  I think about memory a lot because my best friend is terrible at it (although far less terrible than he says he is) and I hold onto the strangest things.  I have maybe fifty memories from the first eight years of my life, but I can vividly remember the whole of a conversation I had my junior year of high school.  I don’t understand it, though there are whole books written on the oddities and science of memory that I suppose I could read if I really wanted to understand.

Remember, Lord, your great mercy and love,
for they are from of old.
Do not remember the sins of my youth
and my rebellious ways;
according to your love remember me,
for you, Lord, are good.  (NIV)

Dear Lord—remember the good stuff You promised, forget all the crap I’ve done.

And I very much want Him to forget the very creative ways I’ve showcased being imperfect. 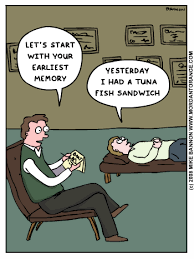 One of the things I like about taking this time to be mindful of prayer (even if I’m not really doing a whole lot of praying, I’m thinking a lot about it, and that counts, right?  Right.  *sigh*) is looking at how marvelously broad it is.  I get to ask this kind of stuff; I get to ask God to forget things.

I was in a book study group at the church I attended just out of college.  This particular church was a country church, for sure; people were saved, baptisms were for adults and were occasions for much hootin’ and hollerin’, and the pastor rarely got a name other than “Pastor.”  It was my family, and I miss them tons even though I’m pretty sure several of them would believe I’ve gone and sold my soul for how I relate to God now.  In this book study, led by folks who had every bit as much smart as they did country twang and were constantly teaching me about what it was to look beneath my own judgments about the world, there were several wonderful older women who were absolutely Church Ladies.

At one point we were looking at Psalm 103 (heck if I remember why) and were talking about that concept of God forgetting our sins.  Can God forget, some of us wondered, and yet still be omniscient?  He has to, the Ladies maintained; He has to forget, because that was His promise, that our sins would be forgotten, removed as far from us as the east is from the west.

“But,” I argued, because I had just graduated college and so of course was the proprietor of all logic in the world, “we still remember them.  How can God be more powerful than us if we know something He doesn’t?”

It was one of the greatest learning experiences I’ve ever had to watch them stake their faith on the idea that when we ask God to forget our sins, He does.  It wasn’t about semantics for them, it wasn’t about memory theory; it was about the promise God made that He not only wouldn’t hold us to our past selves, He would utterly erase them from His mind.  It mattered to them that that be true.  Never mind that that doesn’t totally make sense, never mind that there have been devotions written about how that might work in a different way, it mattered to them that God would not remember the sins of their youth or their rebellious selves.

I spend a lot of time remembering what God has offered to forget, Reader.  I have a lot of theories why, because I have a lot of theories on pretty much everything.  It’s a personality trait, I think.  But there’s really no point to that.  If I have gone to God and said, “This happened, and You and I both know it happened, and I fucked up, and I’m sorry,” that’s the end of it.  Despite the boom-crash Zeus people try to build out of God’s parental moments in the Old Testament, God actually isn’t into the whole woe-unto-the-seventh-generation thing.  That isn’t to say that forgiveness is easy or light, but it is to say that if I’m going to argue with the Church Ladies that I shouldn’t know something God doesn’t, it might behoove me to look at how I’m deciding to hold onto something God has decided to let go.

Am I more knowing than God that I should decide this memory needs to stay?  That it needs to be used not to build me up but to tear me apart?  How much knowledge I must have to override His decision!  How wise I must be!