I know, I know, this is a terribly cheery title—and painful, after last week’s post.  However, my books to review are piling up on my desk, and I do need to do them.

This was an assigned book attached to a larger church examination process in which I am participating (with Magister, actually, so pester him if you want a different perspective).  It is not a book I would likely have picked up on my own, I must admit.  This is partially due to the fact that I get really touchy about the alarmist thinking/speaking of many How To Christian books that proclaim the Church is going to fold next week under the pressure of modern agnosticism and the lack of relevance and so on.  I do think that the Church needs to remake itself, but I think that’s always the case; the Church of the first century didn’t work in the sixth, or seventeenth, so I don’t know why we’re so surprised it doesn’t work in the twenty-first.  People change.

God doesn’t.  And I feel like that gets lost sometimes—God meant for us to gather together in some way and say that hey, this God thing is pretty cool, we should talk about it.  It’s why Jesus told Peter to feed His sheep.  He didn’t have any literal sheep.  He was a carpenter, He wouldn’t have known what to do with sheep.  But He did have a heart for people gathering around the things He’d tried to teach, and that’s the Church.  It ain’t going to go quietly into that good night, y’all.  I wish folks would stop saying that it will, as though our inability to understand PowerPoint is going to crush the Kingdom on earth.  Sorry, but we’re just not that powerful. 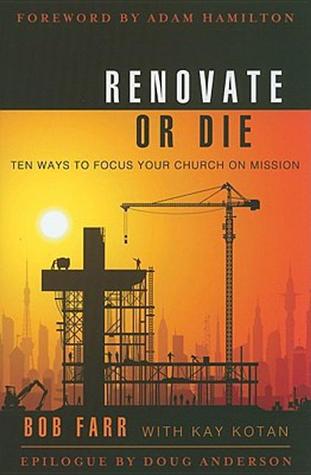 That said, this book.  I always look at books through an editor’s eyes, mostly because I am one.  So I was rather disheartened at the layout of this; some of the pages were poorly set, the font was a weird choice, and there were those little “this is important” pop-out text boxes with choice quotes that you just finished reading anyway why do you need to highlight them again like in magazines.  (I really don’t like those highlight boxes.)  And the epilogue absolutely should have been the foreword; it made little sense at the back of the book.

So yes, that’s judgmental of poor Abdingdon Press, but I think that we don’t get a pass on being good at publishing just because we’re Christian.  If anything, the quality of what we produce as people of faith should be outstanding.

As to content, this is kind of meant to be read as a sequel to Five Practices of Fruitful Congregations by Robert Schnase.  Farr builds on Schnase’s practices by giving a bit of a practical push to them, and I really appreciate some of the structure that Farr adds in terms of distinctions.  He molds his thesis around the idea that really doing the five practices requires renovation and that there is a difference between redecoration and renovation:  in redecoration, you’re changing the outside of how something looks, but renovation requires that you go in and knock stuff down and rip stuff out.  He argues that the Church needs to do some renovation, and I think that part is true.

However, the way he goes about it seems a little severe to me.  He talks about how staff should totally change with a new pastor (which I completely disagree with, as I think this shakes up the church too much and also gives the pastor way too much centrality), and he makes the assumption that every older person does that just because young folk know how to use Google means that that’s the only language we understand—even as he’s incorrectly categorizing types of electronic communication and misnaming things like blogs.  Yes, learning now is different than it was in the 70s, but we’re still looking for authentic relationships that don’t hand us Jesus in touchable watch format.  In fact, there are a couple of places where Farr makes it quite clear that he doesn’t expect young folk to be reading this book at all, which is an annoying example of how writers keep talking about us without ever talking to us as a generation.

Farr takes a while to get into his swing and I most certainly don’t agree with him on everything (for one thing, he puts Bible study waaaaaay further down the list of things that need to happen in a church, especially with youth, than I would; in my mind, if we don’t have Scripture at the core of things, we might as well be running the local Y), but I think this is a solid book to read in conjunction with the Five Practices one (which I’ll review on here soon, really).  If nothing else, he says really smart things like this:

I think it is a good thing to start slow with new people.  Please don’t push them right into a committee.  Start them in hands-on ministries where they can see lives changing.  (62)

Also, for the record, Farr is speaking from within the United Methodist church, so that shapes his voice and suggestions and understanding of how pastors and congregations work together.

It’s a good tool in the box of working through congregational change and growth.  Not the best, but I’ll hang on to it.