Happy Friday, Reader!  My apologies that I didn’t warn you of my absence last week; on short notice, I had the opportunity to go visit a seminary on the north side of Difficulty, so I took it.  It was a great visit and, if I end up there, I think it will be a good school for me.  I’m still not a fan of Difficulty, but hey, there are worse problems.  I will warn you that there won’t be a post next week, as I’m venturing to a land of mountains on a mission trip with 15 high schoolers (oh please pray for me, Reader) for the week.

But in this space in between I write.  I do not write of how the visit went, or of the oh-so-much that happened this week, and I don’t know why.  Perhaps I fear even now letting you know too much, or maybe I worry about sparking a conversation I don’t yet want to have, or maybe I just think that my readers with names and faces I know are not ready for what I want to say.

Maybe I am not ready for what I want to say.

In any case, I leave you with the Internet curse of the too-cryptic half-truth that things are happening, and I tell you instead of a book I recently finished after having accidentally abandoned it for some time.  (Truth?  It got buried under other books in my apartment.  This happens far more often than I’m comfortable admitting.)  It was loaned to me by a friend who also is finding his own place in ministry (via non-profit work overseas), and it had the same effect of important-and-kind-of-amazing that This Odd and Wondrous Calling did. 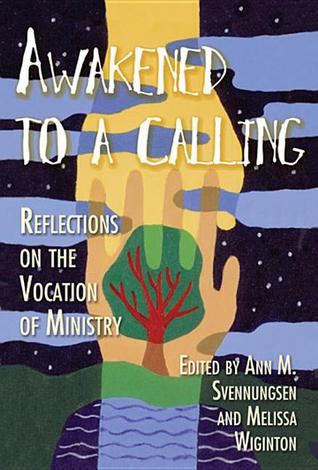 It’s Awakened to a Calling:  Reflections on the Vocation of Ministry, edited by Ann M. Svennungsen and Melissa Wiginton.  It’s a very slim collection—only 84 pages—made as tribute to a guy who worked for a long time and did wondrous things for the Fund for Theological Education.  I have a lot of love for the FTE; I’ve used several of their documents in doing my seminary search, and I know some of their monies have helped friends of mine do schooling because that shit ain’t cheap, yo.  So celebrating that is awesome, and celebrating Candler School of Theology (where Dr. Waits taught) is also awesome because it’s a solid school.

So, the book.  I’m not sure whether it’s a good or a bad thing that I’ve been reading long and widely enough in Theological Things that I recognized almost every name in the Table of Contents, but man, there are some heavy hitters here.  Walter Brueggemann has an essay, Barbara Brown Taylor has an essay, Fred Craddock has an essay, Thomas G. Long has an essay.  Moderate bit of academic fangirling going on for me.  None of the essays (taken from sermons delivered to FTE students) are out-of-this-world mind-blowing, but all of them are reassuring and interesting.  It’s very cool to have people who are Doing Well in Their Field say hey, we started out falling off the bed, too.

Thomas G. Long has a great quote about the impossibilities of telling people that you’re not off your head when you say in the same breath that you hate everything about ministry and you can’t do anything else (something I’ve said a lot this week):

But even when we’ve done the best we can to explain our decisions, to be clear and logical about how we chose the ministry, even when we have done all we can to tell our story—and this is the deepest embarrassment of all—we know we have not told the whole truth because there is something irrational about being in the ministry, something that will not logically compute.  There is a mystery at the center of all this, and we know that when we have told people why we chose the ministry, as a matter of fact we did not choose it at all.  It chose us.  We were chosen for it.  (39)

And when admitting that in the privacy of my living room feels so horribly, horribly arrogant, I was delighted to find that others had been there, too:

Little bees start buzzing around inside your head and whatever modest, accommodating thing you happen to be saying back to the person in front of you, there is a cartoon balloon over your head with what you are really thinking inside of it:  “I have somehow gotten in here by mistake, and I need to get out of here as soon as I can before someone discovers who I really am and asks me to leave.”  (52-53)

And there is the brilliant and simple and so terribly, terribly complex concept that “One sign of spiritual and theological maturity is when we can look at our problems and say, ‘Hallelujah, anyhow.'” (62)  I kind of want that to be my next tattoo, honestly.

There’s the refreshingly honest observation that Mary as an INFP on the Myers-Briggs is neither better nor worse than the ESTJ Martha and that the Church needs both personality types, and needs them both in professional ministry as well as lay.  (I’m an INTJ, so I get really excited whenever people accept and embrace my not being a softer/more approachable personality.)

I think this is an interesting read for everybody, but I especially love it for someone going into/doing/planning around/running the hell away from ministry, even if that’s just particularly intensive lay leadership.  It feeds that special place of humans where we want to know that we’re not the only ones who feel like we lost our class schedules on the first day or that we were supposed to be perfect when we started but failed to be so.  It’s a book of encouragement, sometimes by being discouraging as all get-out, but always by being honest.  That’s pretty darn helpful.

One thought on “People of the Books: Awakened to a Calling ed. by Ann M. Svennungsen and Melissa Wiginton”