I found this odd duck in a neighborhood garage sale last summer and, surprising even myself, decided I definitely needed a book of sermons for a quarter.  The purchase was partly to start expanding my understanding of sermons; I know medieval sermons and 21st century sermons, but not much in between. 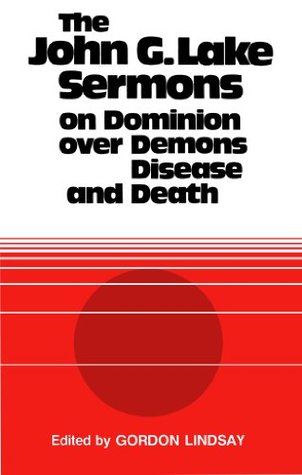 This was originally printed in 1949, so it’s definitely in between.  John G. Lake (of whom I’d never heard anything before picking this up) was a preacher in the U.S. in the 1920s and 30s.  He apparently left quite an impression, considering he has his own ongoing ministry organization, mostly due to his healing ministries.  The editor of this volume himself says he was “dying from ptomaine poisoning” and was cured by reading typed sermons of Dr. Lake (“Dr.” being an honorary rather than degree-bound term).

And that’s the theme of this book—all are sermons of Lake’s describing how it works that we can, via sermon and prayer, heal people like God did, like the apostles did, in miraculous ways.  And Reader, I have no idea what to do with that.

Having come through a country church and known some country church people, I’m not unfamiliar with the concept of faith healing.  I know a woman who believes God made one of her legs grow so that she wouldn’t be off-kilter anymore, and another who had God heal her crippling arthritis.  And yes, I know well the story of the man Jesus told to get up and walk, right alongside the promise that we who follow will do even greater things.

But Reader, I doubt.  Part of it is having grown up with the charlatans that John Oliver so rightly tore apart on his show; part of it is being related to a doctor and a bunch of science types who understand the incredible complexity of the human body.  It doesn’t make sense to me that these kinds of healings are claimed miracles—even the illness of the editor is basically just food poisoning that can mostly be taken care of by being sure to flush your system out with lots of fluids, so who’s to say that’s not what happened rather than some magical sermons?

And that’s the thing that stops me cold—somewhere in the basic layouts of my subconscious, I apparently think of miracles as magic, even though I know that I believe in the concept of miracles and I 100% believe God is at work in our lives every day.  So why not here?  Why can I not attribute this kind of thing to His doing?  Lake himself goes to great pains to tie together belief in God and belief in healing ministries:

We used to have a little Englishman in our evangelistic party who would say to the people when they were praying, “Now let us stop praying for five minutes and BELIEVE GOD, and see what will happen.”  (28)

About the hardest thing to get hold of is a good old-fashioned Christian who believes God.  (40)

So where is my belief?  Where is my understanding that God can do whatever He wants to do?  Part of it is stopped back in that place of logic when Lake discusses his flat-out ban on medicinal cures as a sign of a lack of faith:

Drugs have always been the unbeliever’s way of healing.  God always was and is the real Christian’s remedy.  (43)

I would argue there are many things that require drugs, but then is that lack of faith?  And what of how to be healed—is it a matter of asking hard enough?  That can’t be, because there are so many who pray so earnestly and have nothing.

“When a man’s spirit and a man’s body are filled with the blessed presence of God, it oozes out of the pores of your flesh and kills the germs.”  (108)

Men have assumed that it is necessary to persuade God to heal them.  This we deny with all emphasis.  God has manifested through Christ, His desire to bless mankind.  (132)

That’s a little contradictory, then, because Lake’s stance is that it’s not about pushing God to do what we want but it is also about being what God wants.  I’m confused, because we can’t earn grace or healing; how then to explain the way some are not healed?  Lake doesn’t really give a final answer on that, and that may be because this is a collection of sermons rather than a full write-up of his understandings.

There are many things Lake says that I totally agree with and appreciate, like the idea that sickness as God’s will is a ridiculous concept:

And that the Church has to broaden whom She lays all of her hats on:

The Modern Church must come to a realization of other ministries in the Church besides preaching.  In the Modern Church the preachers is the soul and center and circumference of his church.  The Primitive Church was a structure of faith composed of men and women, each qualifying in his or her particular ministry.  (127)

But Lake lived in such a different time, a different world.  I was prepared to read this and get rid of it, but I find I may be going over and over it for some time to come as I think about how I balance the rationality of being human and the absolute freedom of God.

Rating:  3/5 stars, since it inspired so much thought

2 thoughts on “People of the Books: The John G. Lake Sermons on Dominion over Demons, Disease, and Death ed. by Gordon Lindsay”