Firstly, go do yourself a favor and read I’m My Own Siamese Twin by the Sexy Celibate.  It is an incredibly important note on being kind to yourself, which is really, really hard sometimes but you must do it anyway.

Secondly, my apologies for this being so late this week.  The school where I work had a Very Important Football Game tonight that threw everything else into a tizzy today.  (Go ahead and ask me about how I feel that a football game overrode schooling preparation on the last day before the new term begins.)

So a week ago, I was sitting in a country club here in town remembering how completely not country-club-esque I am in apparel or personality at a breakfast put on for the various people connected to summer internships for three college-age women from Bosnia; we were saying good-bye, and they were thanking us.

This was a project my boss decided was a good idea that was handed to me as a “figure out what to have her do” sort of assignment, which frustrated me no end.  I knew very little about what was expected of the intern and what was expected of me, which is very bad when I’m absolutely a facts-and-expectations-oriented kind of gal.  But I couldn’t undo my boss’s agreement, so I resigned myself to having a Bosnian intern for six weeks who couldn’t get into any of our systems, needed more to do than just scanning because she needed to work on her English and office skills, and would be coming in the deadest part of the school year when even the regular staff are a little bored.

In my understanding of the world, it did not go all that well.  I had never supervised someone by myself before this—any supervision I’d done had been in conjunction with someone else.  I had no idea how to give her tasks that I could just as easily do myself because I’m the kind of person who just gets things done rather than taking the time to lay them out for someone else.  I learned a lot from this internship, which is funny considering I wasn’t the intern, and I’m glad to take that information with me forward into my own career(s).  But I felt badly for my intern, because I was awkward and ridiculous and not all that helpful to her as a boss.

Each of the three interns had to give a speech at this breakfast.  My intern went last, and she spoke first of how much the foundation that had given her this opportunity had done for her.  Bosnia, in case you didn’t know, is a mess.  It’s actually Bosnia and Herzegovina, one country on the Balkan Peninsula in southeastern Europe.  It used to be part of Yugoslavia but declared independence in 1992 after that fell apart.  It celebrated by going to war with itself—the Bosnian War of the early 90s was a fight between the Croatian and Serbian peoples within the country (funded by Croatia, which nearly envelopes Bosnia, and Serbia, which is to the south) around what the new country should look like and who should be in it.  Ethnic cleansing was part of it, as was systematic mass rape and the shelling of whole towns.  Over two million people were displaced by the war which resulted in actual war crimes trials; some consider it the worst conflict in Europe since World War II. 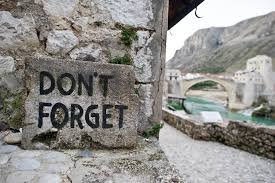 Now, twenty years later, the unemployment rate in Bosnia is still at nearly 60%.  My intern was born in a world of hollow-eyed women and broken men, a world of rubble and uncertainty.  She isn’t old enough to know the world before the war, so getting the chance to come to America was phenomenal.  The foundation also helps pay for her schooling, which is great because there are no jobs for folks without a college education in Bosnia.  So she spoke about what the support—both financial and personal—meant to her.

And she talked about us.  She spoke of the professors who would come through the office area where I had stashed her to work who learned how to say hello in Bosnian so she would feel a little more at home.  She spoke of being able to learn how to work in an office environment and how this experience will make her so much more marketable back home.  And she spoke of how I gave her a book, and then she cried.

Here’s the thing:  she’s an English literature major in Bosnia, but they don’t have access to many of the English texts we can easily get.  When they do find them, often they have to pay outrageous shipping.  There was a book languishing in my collection that gives overviews and diagrams and such of 100 major English works, so I gave it to her, one English major to another.  I listened to her fears of not being able to afford a master’s degree and having to take a different career track than what she wanted, of not being able to succeed.

And that wasn’t enough, but it was part of enough.  Even if I failed miserably at being her boss, I was only part of her experience here, an experience she valued so much it made her weep.  It is so tempting, especially in situations where I have any kind of authority, to think that I have to get it right so that the other person gets what s/he needs out of the arrangement.  Wrong.  I just have to be present, doing what I do, listening to the person and the Spirit, because I don’t have the big picture.  I can’t see how far the impact radius extends for that person.  I can just be my piece of it, and that is enough.

For as in one body we have many members, and the members do not all have the same function, so we, though many, are one body in Christ, and individually members one of another.  (Romans 12:4-5, ESV)