It’s an old tradition (no, I don’t know how old, but I do know that “the lorde is risen in dede” shows up in Tyndale’s Bible in Luke 24, and that dates to 1526) for Christians to say this during Eastertide (Easter season, Easter, however you want to say it; it’s not just one day, in case you didn’t know, it’s 50.  Seriously.  We party ’till Pentecost) and expect the response, “Christ is risen indeed!”

“Indeed” isn’t a word that gets a whole lot of play these days; it’s often thought of as stuffy or proper, easily replaced by “seriously” or “really” or, if you’re a youngerkind, “for realz.”  (Why yes, I do sometimes say that.  Try it.  It’s actually pretty fun.)  “Indeed” itself doesn’t even have a meaning other than amplification, usually—or does it?  I went searching in the Oxford English Dictionary (it’s a favorite hobby of mine) and found some interesting things:

indeed, adv.
1a.  In actual fact, in reality, in truth; really, truly, assuredly, positively.
1b.  Freq. placed after a word in order to emphasize it; hence, with n.=actual, real, true, genuine; with adj. or adv.=really and truly.
2a.  In reality, in real nature or essence, opposed to what is merely external or apparent.
3.  Used in a clause which confirms and amplifies a previous statement.
5a.  In dialogue, used to emphasize the reply (affirmative or negative) to a question or remark.
7.  As an interjection, expressing (according to the intonation) irony, contempt, amazement, incredulity, or the like.

Reader, how apt!  The call-and-response ritual becomes affirmation, becomes expression of amazement, becomes the spoken recognition of the impossible.  Christ is risen—indeed?  How on earth (or off it) can that happen?  This central miracle of the Christian faith is utterly outrageous; Death wins, no one comes back from that (unless they’re super creepy and otherworldly).  I mean, check out this graphic I found about how resurrected folks fare in the popular mindset: 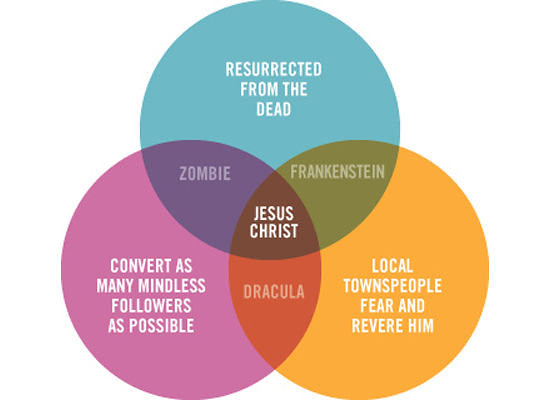 Obviously on a historical and faith-based level I take tons of issue with this, but in terms of recognizing how crazy the thought of following a risen human is I find it pretty accurate.  There is no way this should work.  Christ is risen—say what?  How does that work?  Is He a zombie now?  And surely He isn’t actually alive; somebody just took the body.  April Fools’.

11 While they were going, behold, some of the guard went into the city and told the chief priests all that had taken place. 12 And when they had assembled with the elders and taken counsel, they gave a sufficient sum of money to the soldiers 13 and said, “Tell people, ‘His disciples came by night and stole him away while we were asleep.’ 14 And if this comes to the governor’s ears, we will satisfy him and keep you out of trouble.” 15 So they took the money and did as they were directed. And this story has been spread among the Jews to this day.

Later addition?  Likely; it’s not like Matthew sat down and wrote the gospel the day after Easter, anyway.  But immediately people said no way, this can’t be real.  Christ isn’t risen; dead people stay dead unless something nefarious is at work.  So when Christians get together and say, “Christ is risen!”  “Christ is risen indeed!” they are making a hell of a statement.  The impossible has happened, we say to each other.  Yes, the impossible has happened!  How crazy cool is that?!  So what?

Because He predicted this; nobody else said yeah, I’m going to snuff it but it’s temporary, brb.  Nobody else had any idea that Death could be anything but final—check out how made Lazarus’s sisters were that Jesus hadn’t come sooner.  They were totally sure that dead meant dead, even though their own history had stories where that wasn’t the case.  But also because Jesus didn’t have any help.  In all the other stories, somebody had to go get the dead person and bring him/her back, but Jesus was alone from start to re-start.  This is both incredibly awful and marvelously fantastic because it means that Jesus is stronger than Death.  He doesn’t need anybody else’s help because He is the help; all by Himself, he took the one thing none of us can defeat and walked away (with scratches).

And lives!  Not only is Jesus alive, but He’s alive in a real way—not as a zombie or Dracula or anything, but a breathing, eating, functioning person every bit as human as He was before.  That…that’s mind-boggling, is what that is.  And it’s the core of Christianity; that we celebrate with each other the reality that the Guy we venerate went through the ugliest and most painful death and then came back and had breakfast.

That’s style, when you think about it.  I mean, God most certainly has a wry sense of humor, but really.

So in this Easter season, if you find yourself or someone else doing the Easter response, listen to it.  Hear what an incredible thing it is that we say Christ is risen—and then respond in incredulity and hope and wonder that yes, He is risen.

Now it was Miriam from Magdala, Joanna, the Miriam of Jacob and others together with them who were telling these things to the emissaries.  But these words appeared to them as nonsense, and they would not believe them.  But Peter got up and ran to the tomb. Leaning in, he sees only the linen cloths. And he went away to his home, marveling at what had happened.  (Luke 24:10-12, TLV)