I read this as part of a year-long look at how we do church and I must admit, it wasn’t my favorite of the nine or so books I had to read.  The concept of this book—take a good hard look at your church in the light of Clarity, Movement, Alignment (to mission), and Focus—is solid. This would have been a really great blog post or even a short series. It would make a wonderful diagram to hang in places of meeting, colorful yet stark. The message of getting rid of things that clutter your organization is useful for things that aren’t church; this encourages you to really be aware of what you’re doing, why you’re doing it, and how you’re using the resources you have to do that thing.

Here, let me help you understand this book:

There.  Ignore that this completely focuses on the American church and doesn’t give any thought process to the global Church.  Ta-dah!  You literally now know the entire book; the rest of it is just data and stories to flesh out these four ideas. 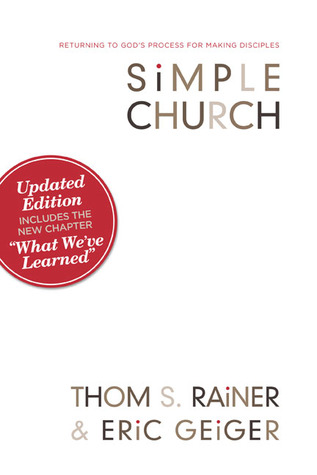 But then it tries to be more than that diagram and kind of shoots itself in the foot. For starters, it’s hilarious that a book about being simple is 276 pages long (although part of that is because the font is hella big; seriously, it’s not even the large print version and yet has to be 16 point, which is just unnecessary). What’s worse is that this is trying to be an almost scientific study; much of the text length is taken up with bar graphs of their research to come up with this model. Bully for them for doing a survey and tabulating the results, but once you look at their data versus their conclusions, it’s not all that scientific. Take, for example, their graph for respondents’ level of agreement with the idea that their church limits special events (p. 217). Ignore for a second the fact that they bias their data immediately by comparing “vibrant” and “comparison” churches, which is one step short of “good” and “crap” churches and those are absolutely qualified terms with inherent connotations. Then look at the accompanying textual breakdown where they laud the “vibrant” churches for their 25% agreeing strongly compared to 6% of the “comparison.”

I’m not terribly much a scientist, but in terms of social constructs 1/4 isn’t usually overwhelming support. Also, the very next step down (“agree”) is equal between the two respondent types. What? Okay, that’s a way to say that yes, the “vibrant” churches lean more toward saying yes to this concept, but it’s not overwhelming and it’s not undeniable evidence.  This presents results with way more strength than they actually have and discusses this theory as though it’s obvious and entirely correct. It’s a model for how to consider the structure of one’s church (even though it says on page 3 that “[t]his book is not about another church model”), and I’m a little too much of an academic to accept their celebration over mostly average data (especially when they present it with simplified explanations to support their theory rather than acknowledging the complexity of their own responses).

It also gets really repetitive, as in “okay, now that you understand movement, here’s alignment.  Alignment comes after movement.  Movement was this, and alignment continues that with…” and on and on.  I promise, guys, I can keep themes and ideas in my head for several chapters at a time.  Although perhaps their target audience couldn’t—I was never entirely sure who their target audience, was, actually, since they were talking about being vibrant and aware and using very savvy churches as the good examples but then using completely outdated technological references.  (In two separate places [pp. 11, 173] Rainer and Geiger explain that a blog is a web log or online journal; this book was published in 2011, so hopefully someone bothering to read a how-to-be-relevant church book is at least aware of blogs and also by that time blogs were so much more than the diaries of the MySpace days anyway.)  And there were some bizarrely sexist moments that popped up, like this disclaimer about what Mary and Martha must have been like:  “At least, that is what our wives tell us.  We don’t claim to know about Martha firsthand.”  (p. 12)  And your wives do?  Do all women have an ESP link that I’ve missed?

There was a jarring mix of self-righteousness and apology from the authors; they laud themselves for this hilarious prank they pulled (during the freaking recession, mind you, when folks would have done an awful lot for a job) posting a fake church job that asked for people to hold conflicting theological styles of leadership.  The authors mock the people who applied for it, saying that they were obviously not committed to being true leaders for Christ.  What?  A) That’s a dick move, which I realize is scandalously strong language but I can’t even begin to tell you how much I hate pranks and there were certainly better ways these guys could have proved their point without lambasting unsuspecting people.  B)  Turning around and putting that in their book, making money off of the idea that they somehow have a better understanding of what it is to be a focused Christian, is just annoying.  You don’t get the Jesus prize for holding to your ideological tenets, sorry.

But up against that is an almost constant apology for being academic in the way they do their research.  Christians aren’t stupid, guys, and if you’re going to make sweeping assumptions about what church should look like, then I want all the data you can give me.  Own your work.  I’ll skim what I need to.

I appreciate the examination of a lot of business models to stress the efficacy of simplicity (Apple, Gap, and Google are all mentioned) but that’s a double-edged sword—the Church isn’t actually a business, and if you’re saying it should be then we have an entirely different conversation we need to have.  And even in the comparisons there was a lot of vagueness (who is “we?” what is “growth” for you?  How do you understand that particular anecdote in relation to your main point? When you talk about “this word translates,” from which language do you mean?).

Good to skim.  Definitely good to take with a large grain of salt.  Stick with the opening infographic.

2 thoughts on “People of the Books: Simple Church by Thom S. Rainer and Eric Geiger”