I have a cold.

It’s sort of the salt in the wound, because I have a cold and my father has upcoming surgery, my sort-of-stepmom is in the hospital, I now officially don’t have a car, one of my cousins is in the hospital, another cousin’s new baby is slightly ill, my housing situation is a mess, I have two papers I can’t focus on enough to write, a friend’s wife has cancer, my chair broke, and I’m to the point where I’m fairly sure if I had a dog to go with my loaner truck they’d both die.  Yee-haw, y’all, I’m living a damned country song.  And now I have a cold, right before Holy Week which is essentially the Superbowl for pastors in terms of hours and focus and time.

Also, we as a country just inexplicably bombed Syria as though they don’t have enough violence to go around and a Supreme Court justice was just appointed who frightens me even more than Clarence Thomas in terms of my rights for my body as a woman, which is saying something considering Clarence Thomas (like the president) has a penchant for sexual harassment.  So perhaps my cold is a little thing.

But all of this seems so incredibly unholy, so terribly profane because it’s freaking Lent and I feel like we’ve been in the Passion for a month.  This much pain and fear and worry and brokenness can’t possibly be holy, can’t possibly be anything related to God.  Where the hell is God, anyway?  I’m starting to feel like I’m trapped in the birthday song my dad used to sing to me because my family is macabre and strange:   “Happy birthday, happy birthday.  People dying everywhere, people crying everywhere!  Happy birthday, happy birthday.”

I make a lot more sense when you see what shaped me, which is true of everybody.

But here’s the thing—in its own weird way, all of that is holy because all of that has God.  Perhaps not God at the helm in the sense that I don’t think God orchestrates pain and war and colds (that would make God rather an asshat, and I’m not down with worshiping asshats).  But God is in the mix because God is everywhere but also because God didn’t become human as a lark.  It wasn’t a weekend vacation; it was a commitment to us and to all of the mess that comes with us, to the cancers and wars and stress levels and even the colds.  God came for all of that.  And stayed. 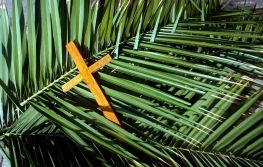 Which is why it’s so intense that we’re now entering Holy Week (where it’s right in the name, in case we were still confused).  Palm Sunday (also called Passion Sunday) was definitely a profane (in the sense of secular) affair as Jesus rode into town on a donkey mocking everything about Roman processions of victory.  And yet it was made holy by the participation of the less-thans, of the forgotten, by the carpet of branches they laid down.  Those same people completely forgot Jesus a day later and did not stand with Him in the Passion proper, and yet still it was holy.  Still it is holy, as we also wave our palm branches and sing hosannas and delight in this one party day after a long time in the wilderness.  We know what’s coming.  And we know that after the pain and the darkness and the profane, there is Easter.

By which time I will hopefully no longer have a cold.

On the next day the large crowd who had come to the feast, when they heard that Jesus was coming to Jerusalem, took the branches of the palm trees and went out to meet Him, and began to shout, “Hosanna! Blessed is He who comes in the name of the Lord, even the King of Israel.”  (John 12:12-18, NASB)

One thought on “Lent, Week Six: Sacred and Profane”