Right, so the fact that this is by a company rather than a person should tip you off to the fact that it’s a little sketch to me.  This is a book that I think I got out of a retiring pastor’s collection; I’m pretty much always down for kid-friendly Bibles and Bible story collections because I’m still trying to find one that doesn’t suck.  (Actually, Interpreter and a friend of his were putting one together years ago and I’m pretty sure that got abandoned.  Frustrations.)  Because Biblical stuff aimed at kids usually does suck; there’s this idea that the Bible is way too much for kids as its own text, which, you know, is kinda true but that’s why you don’t hand it to them to read by themselves in a corner like it’s Nancy Drew or something.  We shouldn’t even do that to ourselves as adults, really.  The Bible is huge and complex:  it’s ta biblia, literally “the library” as in a collection of books rather than one book alone.  Libraries need guides to help you figure out what’s what and how they’re related.  So I agree that we shouldn’t just hand the Bible to kids and say go.

But I disagree with the way that we pare it down, not least because of what usually gets chosen for “children’s Bibles.”  We try to make the Bible cute and fluffy, which completely misses the point of the power of these Abrahamic traditions but also distorts the hell out of the actual Scripture and leaves kids unprepared for when they grow up and figure out that the Bible is dark.  Woohoo Noah’s Ark, how lovely with the two-by-two animals and the family on the boat and it’s so great, yay!  Except that Noah’s Ark was a thing because the world was awful and God said it was a great idea to kill everyone and everything else and then when Noah got off after a horrific storm that tore the world apart he got super drunk because, well, yeah, and totally embarrassed his family and God.  That’s not cuddly.  That’s not cute.  But it’s important, and profound, and human.

And I don’t go on this rant to say that the Bible is awful and we should stow it away or that we should smack kids with the book of Judges.  I go on this rant to say that we are doing such a terrible disservice to kids when we shield them so much that they don’t know how to take on the harder questions of faith—and we continue that disservice when they get to that age and then we hand them the full Bible and basically say welp, get to it.  No wonder so much of my generation is wary of the Church; we were taught that white Jesus would hug us like sheep and then we find out He flipped tables and was brown and was never actually a shepherd. 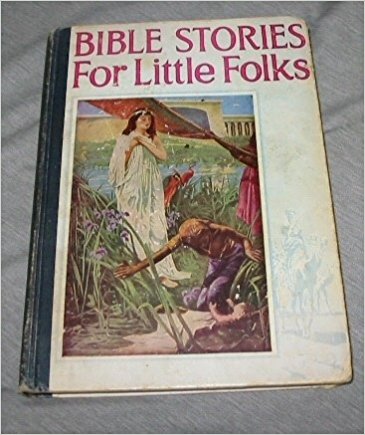 As you can see, I have some opinions on this.  (I have a blog.  I have opinions on everything.)  And I realize Scripture is way, way more complicated than that analysis.  And I realize the Church doesn’t monolithically operate like that—I’m still here, aren’t I?  I must believe in the Church at least a little to want to be employed by it forever.  But this book is just so flat, partly because of its time:  it was printed in 1918 by a company with sketched illustrations likely yanked from some Bible encyclopedia or other (actually, the illustrations inside are one of the few redeeming factors; I really appreciated things like a drawing of Dagon and what ancient weapons looked like.  I’m not down with the white Egyptian princess and the brown Gollum handmaid on the cover, though).

The whole of this structure just rubs me raw.  First, it’s set up as “stories,” which, fine, but that breaks apart the fact that the Bible influences itself.  Yes, it’s a library, but the books are connected.  Disparate stories prevent kids from seeing the connections.  And the “stories” are weird hodgepodge things cobbled together by some mad scientist; Story Eighteen, “The Stranger at the Well,” is Matthew 14:3-5, Mark 7:17-20, Luke 3:19-20, and John 3:22-4:42.  What?  How?  What do those have to do with each other?

And “stories” allows the author(s) to insert these weird little moralistic additions without having to announce that the author is doing so, so the kids might not know that what they’re reading really isn’t the Scriptural content—or intent, for that matter.  Like this in the story of the woman at the well in John 4:  “Jesus meant that as this woman, bad though she may have been before, was now ready to hear his words” (97).

I’m sorry, what?  No.  The actual Biblical text has no aside on the woman’s morality like that.  But now the kid reading it automatically assumes Samaritan woman at well = bad.  Great.  Because the actual Bible isn’t misogynistic enough, we’re adding value judgments on female characters.

To top it all off, the Crucifixion is the last “story” and the Resurrection gets a paragraph.  Seriously.  A single paragraph about Jesus being risen—not any of the appearances, mind you, just the fact that the Marys found an empty tomb.  WHAT THE SAM HILL KIND OF CHRISTIANITY ARE YOU SELLING IF THE RESURRECTION ONLY GETS A PARAGRAPH?  It’s sort of the point of the thing, yo.  Jesus not being dead when everybody said He was dead makes the faith go ’round.

So.  As you can see, I’m not a fan.  This gets 1.5 stars because some of the illustrations are neat.  The text, however, is crap.  Better to puzzle your way through the actual Bible—but for Pete’s sake, please don’t make your kid suffer through the New King James Version.  That language is beautiful and majestic and wonderful and really, really hard for kids.  There are much easier translations out there.  Please don’t teach them from the get-go that the Bible is boring or unreachable, a text only for fancy days.  It’s a hard and complex and phenomenal collection of texts trying to connect humans and the divine, meant to be read and puzzled over and fought with.  Let’s teach kids that.